I have been staying at a bunkhouse at Tanrallt Farm in Llangian, just outside Abersoch for the last few days. It has been a fabulous retreat for me with all the basic facilities I needed after a long day walking. It is a working farm run by Phil and Menir who were great and very friendly and helpful.

I notice that there is a strong sense of identity with the welsh people in this area. You find the Welsh language being spoken in nearly every shop, café and restaurant you go into.

I walk down to Llanengan to the coast where the beach of sand and stone sweeps round in a big arc which is known as Hell’s Mouth. It is exposed to the full force of the Atlantic which makes it popular with surfers. In the past it has claimed many ships that have sunk when drawn towards the coast to shelter from the storms. The RAF used to have an Emergency Landing Ground at Hell’s Mouth . It was also used as a bombing and gunnery range, but that has all disappeared now.

I walk past a National Trust property called Plas yn Rhiw, a 17th century manor house that has been restored. It also has a well maintained garden with superb views across Hell’s Mouth. 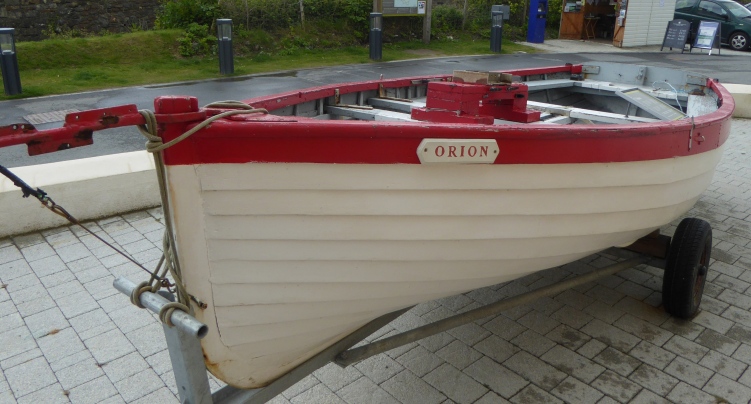 In the village of Rhiw I met a couple of walkers that had become estranged from there group. They had no contact number of any one in the group they were walking with and only a hand drawn map. I had hardly seen anyone else that day so I could not help them.

As I approached Aberdaron the heavens opened, only for a few minutes, but enough to soak me. Up to this point the weather had been sunny and warm. I went into the Porth y Swnt visitor centre in Aberdaron to dry out. The place is worth a visit to sample the local history and culture.

I walk around the whole peninsula to the south of Aberdaron and see Bardsey Island just off the coast. The island has been a place of pilgrimage, apparently three trips to Bardsey is equivalent to one trip to Rome.

On the way back into Aberdaron, I meet a couple who are staying only a mile away from where I was. They insisted that they gave me a lift back, so a big thank you to George and Lesley.