I am looking forward to todays walk as my wife is joining me. We leave the car in Birkenhead and catch the bus to Hoylake to start the walk, but first we find a coffee shop for sustenance. 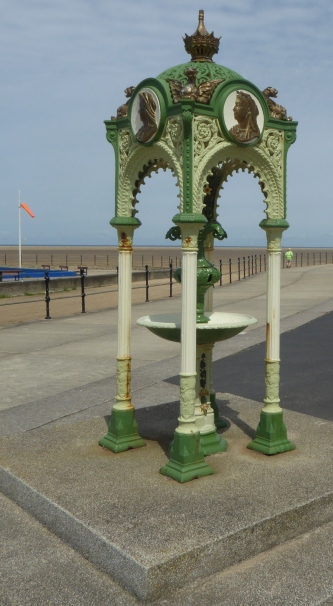 Did you know that Hoylake was where Eric Bartholomew first met up with Ernest Wiseman in the 1940’s who later became famous as Morecambe and Wise.

There is a good path along the seafront and Wallasey Embankment with good views of Merseyside and the Lancashire coastline. This part of the Wirral is not short of golf clubs with another one at Leasowe.

Leasowe also has a lighthouse which stands back on the sand dunes, the oldest brick built one in Britain. At one time when it was operational it had the only known female lighthouse keeper.

New Brighton is a seaside resort at the mouth of the River Mersey. It was built to encourage tourism, especially the “well heeled” and modelled on Brighton on the south coast. We stop for lunch at Perch Rock which was built as a coastal defence battery to protect the Port of Liverpool. It now houses a museum of mainly maritime history.

We enjoy a level walk from New Brighton to Seacombe along the waterfront with great views of the Liverpool docks and skyline. It is all pedestrianised, so you only have to watch out for cyclists. If you are lucky you might see a cruise ship coming in to dock.

Seacombe is where the Mersey ferry takes you across the Mersey to Liverpool. This is where we end our walk today, which we both enjoyed.