Unfortunately I lost my favourite hat whilst walking through the park. It had ear pieces that kept me warm, it was like a comfort blanket. I even went back looking for it.

Today I set off back through the Country Park by the Visitor Centre in a courtyard by the Old Stables. I pass this and continue above the shoreline before making my way down to the beach.

It was a real treat walking along the sands of Culzean Bay for a couple of miles. Looking back I got some great views of the castle

At Croy I leave the beach and climb onto the grassy cliff tops which take me to Dunure. There are the ruins of a small castle which was owned by the Kennedy family, the same as Culzean Castle. By the harbour there is a good pub, which I had eaten at the night before and a café which I stop at today.

I had noticed previously when driving nearby a place called the “Electric Brae” This is where you stop and have the illusion of rolling uphill. The illusion is all to do with how the surrounding countryside slopes. 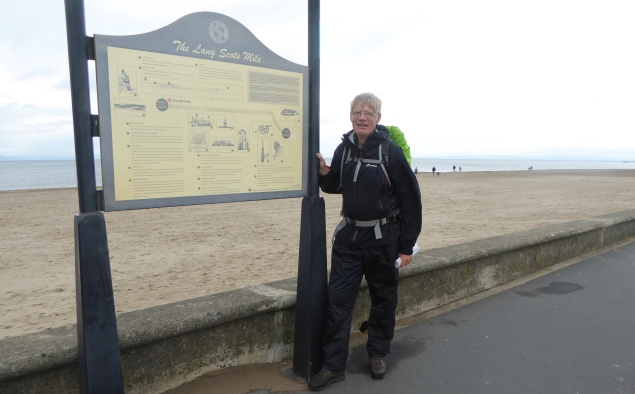 On entering Ayr I stop by a plaque telling us about “The Lang Scots Mile”. Up until the 18th century a Scots mile was variable usually longer than an English mile. Some days when I am walking I still get the impression that is the case today. The Lang Scots Mile was created along the promenade at Ayr to commemorate the towns association with Robbie Burns and to encourage people to take exercise.

At this plaque I got talking to a nice lady called Cath and the conversation got round to what I was walking for. She offered to give  me a lft back to Culzean at the end of todays walk but I knew that a bus would be due which I used instead. Anyway, thank you Cath for your offer and donation.

A Girl and Her Commander