Whilst at Oban I noticed boat trips going out to the Corryvrechan and also the Wetherspoon pub at Oban was called the Corryvrechan. I was curious about this and decided I would find out. It’s a narrow strait between the Isles of Jura and Scarba where the strong tides create a whirlpool. It is the third largest in the world and can create a violet cauldron of waves.

Today is another walk from castle to castle, starting at Barcaldine and finishing at Castle Stalker on the islet on Loch Laich, an inlet off Loch Linnhie.

From Barcaldine Castle I walk down the minor road to where it meets with the main road. My route takes me around Loch Creran and across the Creagan Bridge. This was opened in 1999 and saves over five miles when travellers used to have go around the head of the loch.

It was a relief to leave the main road and follow the peninsular around to Port Appin. I meet a lovely man, Archie who owns the Lighthouse Craft Shop with his wife Sharon. He is Icelandic and is married to a Scotswoman. They are keen on promoting Scottish designed and made artwork. They also sell coffee and home made cakes. 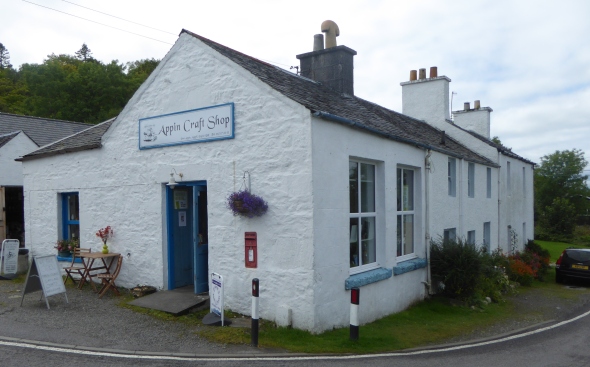 Port Appin also has a community run shop and the Pierhouse Hotel and Seafood Restaurant. Just by the village hall is a lighthouse exhibit of the lantern. The inside of the lantern displays information boards.

As you leave Port Appin and reach the main road there is a millennium pathway which joins with the Scottish Coastal cycleway. At Portnacroish I look down on Castle Stalker. It became famous in a Monty Python sketch called Monty “Python and the Holy Grail” where it was refered to as “Castle Aaargh”