The waiting was over, all that pouring over maps, checking routes, buying equipment, the time had come.

As I stood by the signpost at Land’s End, I felt like a pilgrim father setting off for foreign lands. With the gales blowing and the wind in my sails, I was off. 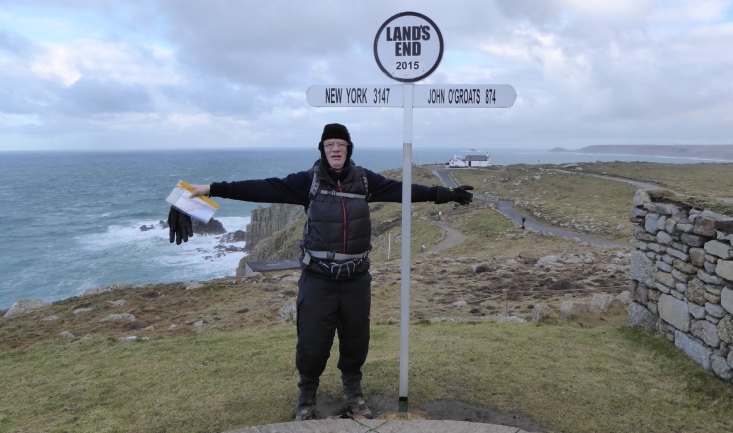 With the family with me we set off along the well trodden grassy path away from Land’s End. Looking back we could see the Longships Lighthouse disappearing.

In my excitement, I already managed to take a wrong path as we entered into Sennen, ending up on someone’s driveway. We eventually regained our path into Sennen Cove a delightful sandy bay.

The weather was bright and sunny but the wind was blowing hard. We follow the South West Coastal Path towards Cape Cornwall. This is where Cornwall proudly displays it’s mining history and is known as a World Mining Heritage site. The Cornish miners must have been hardy folk to work in such austere conditions clinging so close to the sea.

We pass through many old mining works of Botallack, Geevor and Levant, with the spoil and buildings all around.

Soon we come to the lighthouse at Pendeen Watch. Rumour has it that Pendeen and the surrounding villages were involved in smuggling activities. I didn’t meet anyone with a stripy jumper, an eye patch or a cutlass. I also didn’t find a keg of rum either.

It had been quite hard going over rock strewn paths, climbing boggy paths. By the time I got to Gunard’s Head I was feeling quite knackered and the light was beginning to fail.

By the time I got to the Tinners Arms in Zennor it was dark. The only sustinance I could muster was a pint of water.