I return from a visit home to resume my walk at Ard Airigh or Ardery where there is a little island off the shoreline, Garbh Eilean. I walk down to the hive where there are binoculars to view the island. If you are lucky you may see seals basking on the shores of the island.

I pass through the woodland at Bunalteachan on my way to Resipole. There is a Camping Site that faces right down the loch with only the road between the site and the shore. The site looks flat and well laid out but you might feel the wind coming up the lock. Next door there is a gallery that runs art courses and you can take canoes out on the loch.

Above Resipole is Ben Resipole, the highest peak on the Ardnamurchan peninsular. On a clear day you  can see Loch Shiel and the Isle of Skye as well as Loch Sunart.

I walk into Salen and around the bay. It is the first village I come to on Ardnamurhan. Because of its remoteness, in the second world war the area was used for military training. The village hall is an old army tin hut. There is also a community run village shop on the jetty.

Salen is imprinted on my mind because when I came past here for a holiday 40 years ago in an Austin A40 car, a lady reversed into me at one of those passing places. 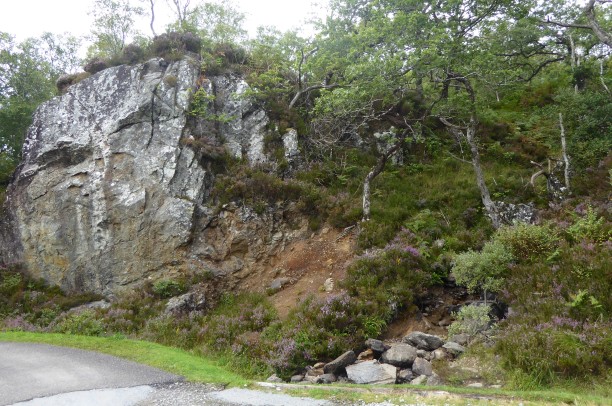 At the hamlet of Glenborrodale there is a RSPB reserve where there are some trails to follow, a castle which is more like a stately home and is part of the Ardnamurchan Estate. It is now run as a B&B and restaurant.