I did not quite cover the distance I intended yesterday, with my knee strapped up I was walking quite stiffly and the knee was aching by the end of the day. I continue again today, again with a support bandage on the knee and I hope over the next few days I can catch up.

Balmacara is a traditional woodland crofting estate with great views of the Isle of Skye. I continue along the road to the Kyle of Lochalsh and stop to take a look at the Murchison’s Monument. Donald Murchison showed extreme loyalty by collecting rents for his exiled Jacobean employer, the fifth Earl of Seaforth. 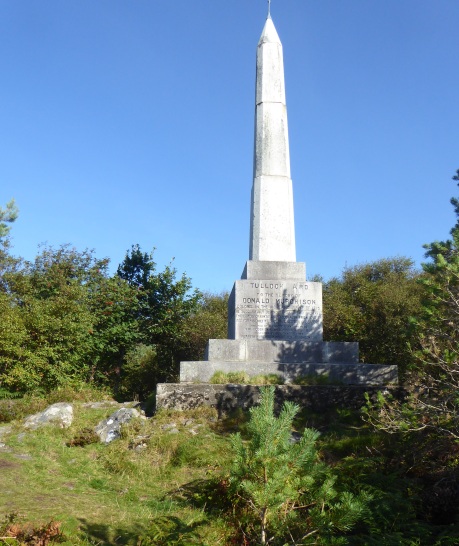 The Kyle of Lochalsh is the gateway to the Isle of Skye. Since 1995 you can cross by the Skye Bridge but before that you used to cross by ferry to Kyleakin. The railway line from Kyle runs along the coast up along Loch Carron across country to Inverness, a very scenic route.

As I walked towards Plockton I met a couple, Kevin and Jennifer who were out walking their dog Bernie, a black Labrador. I must say the dog was very patient while we chatted. They were on holiday and had rented a cottage further up the coast.

At Plockton I walked down to the airfield and had hoped to walk around the headland to the harbour, but the route was too overgrown. I ended up walking back to the station and walking along the road where I found a nice spot for my lunch.

From Plockton I walk along a woodland path along the coast and come out by Duncraig Castle, which had its own railway station.. It looked more like a manor house, it was closed for some extensive renovations.

I continue to Stromeferry where there used to be a ferry across Loch Carron to North Strome, but with an improved road around the lock, the ferry ceased running over 20 years ago. As I walked down to the jetty I noticed another bunkhouse.