Today I meet up with Hadrian’s Wall and the Solway Firth with views across the border into Scotland.

First of all I had to catch the bus to Glasson and walk a couple of miles to Angerton to start todays walk, as there was no buses directly to Angerton.

The village of Anthorn is dominated by 13 transmitter masts which is a radio station operated by NATO. It has a VLF transmitter used for transmitting messages to submarines. As this site occupies the whole corner of this peninsular it takes me some time to walk around it.

Bowness-on-Solway is the official start or finish of the Hadrian’s Wall Path. Most of the stone in the wall has disappeared and been used in building the local houses. The line of the wall is a raised line of turf and mud. 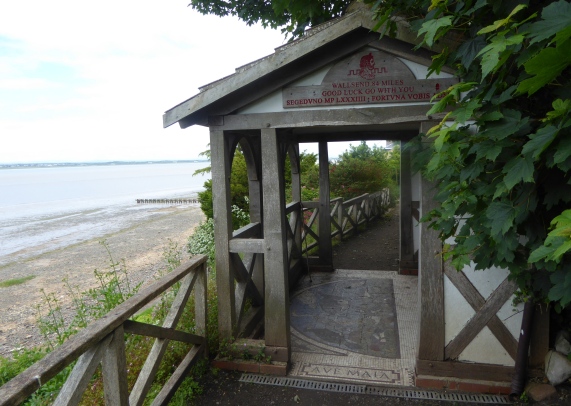 The road is long straight road through the salt marshes from Bowness to Burgh-by-Sands. It is hard to imagine that in bad weather the whole road and the marsh disappear under water.

The locals have a special way of fishing called haaf-netting. The net is spread across a rectangular frame and supported on three legs. The fishermen wade into the water before the tide changes stand behind the nets and hope to catch salmon and trout.